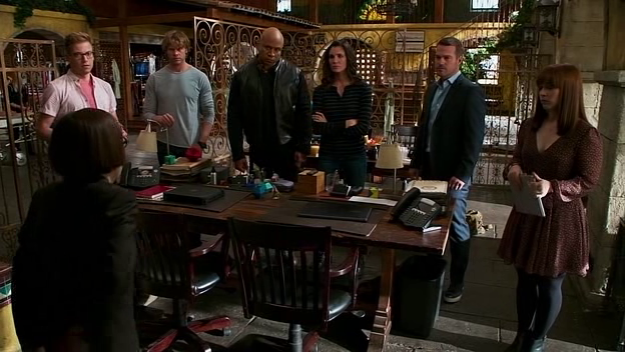 Angels & Daemons is another strong standalone episode from the solid combination of Andrew Bartel’s writing, and James Hanlon’s direction.  The pair have previously collaborated to bring us the important character based episode, The Grey Man (S6) and earlier this season, Driving Miss Diaz.  Bartels’ episodes may not (yet) form part of the season’s arc, however they do provide amusement (S5 Allegiance) and key insights to the main characters (also think S6 Humbug and Fighting Shadows).

The plot itself is full of twists and turns from the outset as a DEA sting captures drug dealers, and NCIS is called when a body is discovered in the water by their boats – but this time there is no involvement from DEA Agent Talia Del Campo.  The case revolves around murdered Larry Overson, an ‘angel’ investor who provided money to start up tech companies; a self-made billionaire.  His previous work at the NSA saw him and former Navy partner Mark Powell develop a ‘daemon’, an undetectable computer programme that runs in the background of a system to collect personal data.  The pair likened it to spying and decided to not tell the NSA of their creation. Overson later found the daemon hidden in the software of a new tech company’s app and believed that Powell sold it.  Powell is penniless (having lost a court case with Overson about intellectual property) and is the prime suspect in his murder.

The agents discover Overson was investing in Flibbit, a fledgling tech company and so Sam and Callen go undercover, with highly amusing results.  Callen moves around on a hover board, backwards, forwards, round in circles.  Sam can barely keep a straight face!  Whilst Callen plays the arrogant billionaire who loves fun (yes, the office has a slide and there is a great shot of Callen sliding down), Sam uses his charm and charisma to sweet talk Flibbit’s owner, Jessica in to believing their cover.

There is more humour abound as Deeks talks to a surfer who is about to attend his weekly board meeting.  Literally, on the beach, with a surf board.  Monty yet again gets a mention (will we even see him again?), as Deeks starts to think up hair brained money making schemes that he would get a team of Eric Beale’s to work on.  Kensi is clearly the grounded one in their relationship and shoots down each of Deeks’ ideas.  And then there are the jokes from Deeks that ‘Silicon Beach’ would be so much more fun with an ‘e’ on the end…It was also amusing to see the bad guy Chopra’s dead body falling into the slide, to be stopped at the bottom by Deeks’ boot.

All the pairings receive a reasonable amount of airtime; Nell is allowed out of ops only to develop a bout of seasickness, and Eric tries his best to get out in the field.   Granger briefs the team and Hetty makes a marginal appearance and of course, has the closing scene with Granger.

The main theme of this episode seems to be deception.  Powell throws the team a curve ball and is eventually found to be Overson’s murderer, having sold the daemon in partnership with his lawyer.  As always, the team’s undercover operation tricks both the good and bad guys.  Flibbit’s security officer is really Mossad, who is tracking an undercover agent Pakistani Inter Service Intelligence (ISI) agent, Chopra, who is masquerading as a techie at Flibbit.

Kensi to Powell, in the closing boat shed scene:

Deception also goes hand in hand with Callen, as the episode is also a study of his character.  Sam worries that Callen is keeping secrets again and that he may go rogue.  Instead, he is using Government resources to illegally run a background check on ex-girlfriend Joelle’s new man.  He justifies his actions by stating he’s protecting the team after a mole ousted him and Sam earlier in the season (Command & Control).  Or as Kensi states – jealousy; another thread of emotional insecurity and one which Callen plays on during the closing bullpen scene. 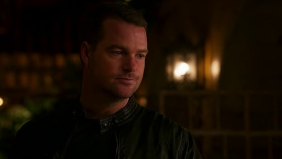 He finally admits feelings of jealousy, and talks seriously about how he thought he might be ‘the guy’ for Joelle, that he even brought a ring and had it all planned.  Until Callen mentioned a ring and a proposal, it seemed like a rare moment of honesty…but Sam looks increasingly amused and then calls him out – G is just saying what he thinks Sam wants to hear- and he was pretty convincing!  The scene is reminiscent of S4 Paper Soldiers, when Callen turns Nate’s concern for him around, so the psychologist ends up talking about himself and his relationship, only realising he has been played after Callen has walked away.

These little snippets are rare revelations in to the personal / private side of Callen, his flawed character and his naturally untrusting nature.  Sam even reminds him that he has lived in worse places than Powell’s car – by his own choice.  The usual banter between Sam and Callen seems a little strained and more along the lines of bickering, causing Kensi to liken them to an “old married couple”, and even Granger to passes comment when their barbs roll over in to the ops briefing.

By contrast there is little development for either Kensi or Deeks, although Kensi’s mathematical abilities impressed Deeks and would have made Sam proud had he been present.  But both have had prominent roles in a number of episodes this season, which looks set to continue with next week’s ‘Come Back’, featuring the return of Kensi’s ex-fiance, Jack.

‘Angels & Daemons’ is a fun-filled topical episode of how potential spyware could be uploaded to millions of smart phones through app updates. Importantly though, is the reminder of the unresolved storyline about the mole.  The traitor may have been captured last season, but the team still do not know to whom he reported.  And a true rogue/terminated NCIS Agent DeAngelo is also still free to return when Hetty calls in her debts.  The mole is still lurking in the background and hopefully will be fleshed out  more towards the end of the season or maybe during season eight.