It had been teased by showrunner Shane Brennan last September, that the finale would see Sam’s family in jeopardy.  Sam’s only known enemy is Tahir Khaled who returned earlier this season in “Revenge Deferred”; his escape neatly setting up his imminent return in “Talion”.    Talion’ law is an old Babylonion principle along the lines of ‘an eye for an eye’ ‘a tooth for a tooth’, and therefore Tahir is not only out for revenge but has come to LA to destroy Sam’s family, as he perceives Sam has destroyed his.

As has been the case throughout the show, episodes which centre around a main character and with a simple plot tend to be the most successful.  There does not have to be a convoluted narrative and generally without such complexities, the characters can develop and grow in their own right.  In Talion, it also allows the story  of traditional revenge to unfold. Tahir and his men have infiltrated Aiden Hanna’s military academy but Aiden realises something is amiss and sneaks out of his dorm, sending a coded alert to his dad, who mobilises NCIS in response.  The team fly up the California coast to San Francisco and breach the academy to find Aiden and take down Tahir once and for all.

The team go tactical and take sensible precautions, checking surveillance, the possibility of wired doors and quickly develop on the spot strategies to infiltrate the hall where the hostages are, and for Sam to confront Tahir.  This means the team have to trust each other implicitly, despite both Callen and Deeks’ concern about the stupidity of some of the plans.  Callen has to trust Sam’s instincts about his son, Deeks trusts Kensi’s impulsive plan to impersonate a cadet and deliberately get caught.  And Kensi has to trust all the cadets to follow her Chinese whispered order that they all lie down when she stands up.

Along side the stealth are two great fist fight scenes.  Callen and Deeks shoot the guards in the hall as Kensi brings her knife to the fight, tackling the man on the stage.  For those that know actress Daniela Ruah is pregnant, the intensity increased with the concern that Kensi might be seriously injured in order to write her out for several months at the start of season eight.  But her fight is physical and believably coordinated, without allowing an opportunity for Callen or Deeks to shoot the guy.  Kensi more than holds her own, eventually stabbing him.

The second fight takes place after Sam goads Tahir and his men in to firing their guns repeatedly in to the school office.  Just as it seems he can’t get out alive, Sam gives himself up – an action that mirrors his son’s earlier surrender.  The one on one fight with Tahir is fierce, but Sam is not going to lose.  Earlier, Sam swears that Tahir will not leave the academy alive, but with Callen having rescued Aiden and both watching Sam physically beat Tahir, Sam has to  renege on his own promise.  He will not slit Tahir’s throat with his son watching, and so Tahir is taken into custody.

It was great that Aiden was allowed a chance to develop as a character in his own right.  He is clearly a chip off the block; he is stoic, strong, defiant and an independent thinker.  He thinks of others before himself and just as he father has complete faith in his son, so Aiden has complete faith in his father.  It is for this reason, that Sam cannot kill Tahir in front of his son.  Granger too, shows complete faith in Sam and the rest of the team.  He calls off the local Feds, withholds information from SECNAV, and neither he or Hetty pick up the ringing phone post-mission.  He is still has many of the characteristics audiences love to hate, but they are now toned down and he is almost assimilated into the team.

There are small elements of humour during the episode; Deeks comments about attending military academy causes Callen saying he would have been a drop out (hmm, pot-kettle-black..?)   Callen finally persuades Sam to finally speak to his wife – promptly passing his cell to his son to make the call first.  Most of the humour came during the aftermath; Kensi sweetly tricks Deeks into getting up close and personal to check if she had something (other than her birthmark) in her eye, before she leans in for a kiss.  Deeks’ odd revenge is to say she had a booger up her nose, prompting Kensi to wipe her nose down his sleeve. Nell and Eric were another set of partners beautifully in synch when they worked the case in ops and then reverted to their usual uncomfortable weirdness in front of Hetty and Granger.  Their peculiar relationship is developing off screen – Eric has lipstick at the corner of his mouth, courtesy of a celebratory kiss from Nell.

The only frustration comes from the confusing continuity regarding Aiden.  Back in season four’s Rude Awakenings (part 2), Callen informs Kensi and Deeks that Sam fell in love with his wife when they were working on the same task force, which was eight years ago.  With this story and the age gap between their daughter Cameron and Aiden, it was generally assumed Aiden had a different mother.

The season seven finale was like a mini-movie wrapped up inside forty three minutes; there was action, tension, excitement and thrills from the opening scenes almost up to the closure. 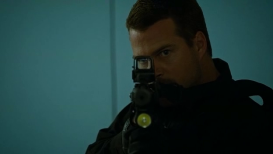 Tahir showed how nasty he was when he crew beat a cadet, Tahir himself punching a female officer several times, before shooting her in the knee and he also beat Aiden.  It seems like episode writer R Scott Gemmill has been taking lessons from the resident writer of darkness, Frank Military.  The locations are primarily limited to the academy hallways and offices and the action takes place within a few hours during the dead of night.  Episodes usually take place over the time span of a day but the locations are varied.  The restricted space and the time of night lend to a more intense storytelling, with only cut backs to Ops providing a change of scene.

The overriding theme of Talion (and one of the entire show’s) is family, and here everyone pulls together to support Sam and save his son and the other teenage pupils. The resulting episode is one that is team based, 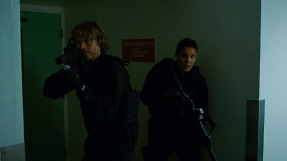 as this time Kensi and Deeks are not allowing Sam and Callen to fly off on their own to save the day.  In a way, it is reminiscent of season four’s Kill House and six’s Spiral (both incidentally, written by Dave Kalstein who leaves the show after seven seasons).  This is where the pleasure is derived; the team are acting as a team, on the same mission, in the same building albeit primarily in their pairs.

There may not have been a cliff hanger for the second season running but that does not detract from a thrilling finale.  Not every season needs to end in a ‘will they or won’t they survive’, particularly when  most fans know the stars aren’t leaving and so, of course they’ll survive.  It is just as acceptable and maybe more heartfelt and genuine to leave the characters in a better place than where they started.

Rate the episode out of five stars below, and please leave a comment with your thoughts on the season finale.