Ghost Gun had the daunting task of interweaving three plot lines within a forty three minute episode.  There is the continuing story line of Kensi, the usual case of the week and the search for the mole starts in earnest.  This week, the team investigates a Navy machinist’s rooftop murder, leading them to a custom auto parts fabricator shop which is a front for the manufacture of ‘ghost guns’.  Already one delight of this episode is that NCIS investigates a murder that is connected to the Navy, something which the Los Angeles team seldom do.  The flip side is a lack of any undercover, something which has been missing from recent episodes.  To a certain extent this is understandable, as to establish an undercover alias would mean dedicating a large portion of the episode to case, resulting in less team time (and mole time) and less (if any) screen time for Kensi.

The team needs to split, to enable three simultaneous stories to develop and that also allows character development through new and changing dynamics.  Hetty sends Deeks to Kensi’s bedside, sends Sam to interrogate the season six mole, Carl Brown, and invites Anna Kolcheck to partner up with Callen.

Granger and Nell also partner up in the field.  Eric remains focused in ops.  As usual Granger has the best lines, confirming that Nell’s first name is “Special”, in response to an admirer’s question, and whacking a running suspect with a bicycle wheel, stating he prefers a bat. Anna Kolcheck has moved to LA having applied to the ATF, supported by recommendations from Hetty and her former Chicago PD boss.  This allows a little focus on Callen’s personal life and as usual, he doesn’t give much away.  Anna’s question to Callen, if her working part time with NCIS is weird, implies they do have some sort of relationship, supported by the ease of their conversation. 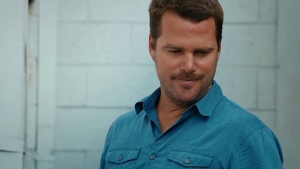 Callen says it’s not weird and Anna pushes him to say how he feels.  His answer, that he is happy she moved to LA, is said without his usual sarcastic lilt, so is this truth, a lie or uncertainty?  Or maybe just frustration that he’s had to admit his feelings to her.

Already a week has eaten in to Hetty’s deadline and the starting point of her mole investigation is Carl Brown.  Sam surely has to be the only person not potentially under suspicion, as the mole obtained information that directly targeted his family.  Face to face, he quizzes Carl in a quiet and controlled manner, correctly guessing that he turned traitor for love.  In the opening scenes Sam tells Callen he enjoys spear fishing without a tank so he can learn to control his emotions, his breathing…This practice of self control pays off when Carl openly admits his son was attacked simply because Sam is his father.  Although the interrogation was not as clever as in last season’s The Long Goodbye, Sam again employs psychological tactics.  Eventually the blunt truth of a bounty on his head forces Carl to reveal the name of the woman who employed him – Natalie Grant.  Hetty and Sam now have a name to take the next step in the investigations.

The drama of Kensi’s coma continues from last week, where she subconsciously obeyed Hetty’s order to squeeze her hand.  Deeks’ mum Roberta has also witnessed this, as well as Kensi opening her eyes and trying to speak, and she calls her son, blatantly exaggerating her prognosis.  This is a real eye opener in to the character of Mrs Deeks.  She outwardly appears strong but she is clearly over compensating and cannot cope well in times of stress.

She turns to smoking, makes inappropriate comments (e.g. about men not being nurses) and is generally living by her own rules, regardless of others (persisting in using a mobile in the hospital).  This begins to explains Deeks’ character, how his mouth often runs away from him and he can at times make improper comments under the guise of a joke.  His mother however, goes to the extreme.  Her inability to cope and her defence mechanisms could either be residual guilt she could not protect her son or that her husband’s brutality has made her unable to cope in times of emotional stress.

Deeks is unable to talk seriously to his mother, with her behaving childishly and would rather stay at work than visit Kensi and witness her awakening.  Instead he turns to Hetty and opens up, revealing his deepest fears that he won’t be strong enough to support Kensi.  In direct contrast to his mother, Hetty remains calm, instilling self belief and confidence into Deeks, and sending him to be with Kensi.

He is rewarded in the closing scenes with Kensi waking from her coma and seeming to recognise him (so hopefully no amnesia subplot).  Despite encouragement, she is unable to move her left hand, and the expressions in her eyes convey how clearly she understands the implications.  Kensi is partially paralysed and the tear that runs down her face confirms they both know there is a long road ahead.

Music video director Benny Boom directs his first NCISLA episode and as well as conforming to the show’s established look, also provides his own flamboyant touches.  Particularly noticeable was the stunning three hundred and sixty degree camera movement around a walking, talking Sam and Callen on the roof top.  And veteran writer Kyle Harimoto has turned in a solid script, greatly improving on last week’s episode.  The intertwining of three plot lines worked although the case would always be secondary to the mole, and Kensi/Deeks.  It was great to hear that Sam and Callen visited Kensi, and that she has now emerged from the coma shows an understanding of how impatient viewers are.  For a crime procedural, it would be extremely boring to have Kensi comatose for too many episodes.    This contrasts with the convoluted and drawn out  mole plot.  Last season there were brief references, more obvious ramifications for Sam and periods of nothingness.  It can only be the DOD investigation into the Office of Special Projects that prompted a hit on Carl Brown, and Hetty’s self-imposed deadline now means this WILL end.  But like Kensi’s recovery, it is a work in progress.