The high standard of episodes in season eight continues with Parallel Resistors, where the case of the week concerns the safety of national security, after a graduate student working on a classified navy project is electrocuted.  The investigation is dealt with in an intelligent and interesting manner, full of twists, but it is the underlying theme of family and the intriguing child guest character (superbly acted by Shree Crooks) which really lifts this episode.  Kensi is finally making progress, demonstrating the well thought out sub plot and the timing of each phase of her recovery, which is so much better than the white ghost story line from season five, which was so far removed from the agents in Los Angeles, there was little investment until the team had to rescue her.

The case of the week starts with two rival colleges competing in a brainiac quiz and it seems that every character at some point is suspected as being the possible culprit, from the victim himself to the myriad of nationalities who may have had access to the labs.  The rival colleges are developing different parts of an electromagnetic weapon for the Navy, and the detail behind the technicalities showcase how inadequate the field agents can be. As a result Nell once again ventures into the field, but undercover as a grad student. 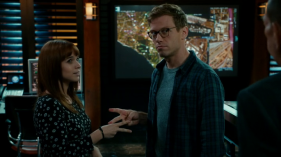 This time her IQ is on display and it is a much more realistic portrayal of her character.  There is no self-doubt or over-confidence, no ridiculously poor driving skills and no physical or gun fights with the bad guys (or girls).  It should be noted however, that Nell and Eric play ‘rock, paper, scissors’ to decide who ventures undercover, with an unamused Granger sending Nell anyway.  Deeks accompanies Nell as her boyfriend (a poet), as earlier he is clearly baffled when a student talks tech, to which Deeks can only say that he once made a potato clock.

Kensi’s physical therapy is progressing well, but the look on her face belies her state of mind.  It is almost as though she is going through the motions and can’t see what she is actually aiming towards.

Enter amputee Sullivan who immediately insults her, causing Kensi to react, showing the fiery side of her personality.  Sullivan is (in Kensi’s words) “a dick”, but can he see how much Kensi is struggling and is playing her, or is he just genuinely obnoxious?  His words quickly have Kensi upping her game to match him for strength and Deeks arrives as the two are locked in an arm wrestle.  In a conversation with Sullivan, Kensi has already referred to Deeks as her fiance and with the drive back in her she asks to see the ring, with a request to not see it again until she is out of the wheelchair for good.  It is great to see that Kensi has found that something to snap her out of her melancholy and both scenes were touching and amusing.  Deeks’ humour maintains the lightness of the mood; saying he hocked her ring for a Segway.

Bullpen banter is not as fun as usual and centres around asking after Kensi, and Sam’s intention to honour his daughter Kamran’s wishes and send her to military academy. Neither Callen or Deeks understand why he would do this as both men believe (and Deeks actually commenting) that kids need a supportive family. Sam agrees, otherwise they end up knuckleheads like Deeks and Callen.  Both take mock offence but the scene is set for Sam and Callen’s encounter with Nadia, the shy daughter of the victim.

She has been accepted to CalTech at the age of twelve but not as a boarder (and Callen scores a point off Sam).  She provides vital clues for the team yet struggles with Callen’s apparent illogical leap to request Eric searches for embedded information in a video.  Nadia is crucial to the plot and is later kidnapped to obtain her iris scan to access her cloud storage.  Taking lessons from the agents, she fakes an asthma attack and sends a photo from her cell phone, allowing Sam and Callen to launch a rescue.

In the closing scene, Nadia hugs both Sam and Callen in thanks – she is now considering a career as a special agent rather than an engineer.  Sam realises he won’t have many more of those hugs if Kamran attends military school, which Callen verbalises.

Sam of course counters by saying that Callen is seriously lacking those special moments in his life , prompting a brief conversation about him having kids.  It is an idea he is open to, provided he finds a woman – the right woman (suggesting he is not romantically involved with Anna Kolcheck).  Sam gets the last and possibly the funniest line of the entire episode – as the screen turns black for the closing credits, he suggests Callen adopts Beale.

The opening bullpen scene is a reminder that Callen (and Deeks) grew up without a supportive family and the closing talk that Callen lacks special moments, sets the scene for the return of Callen’s father in next week’s episode, Glasnost.  Surely Callen will finally receive answers to the many questions he has and that may allow him to move forward with his life, and enable him to have a committed, serious relationship.

Please leave a comment and let me know your thoughts on this episode.